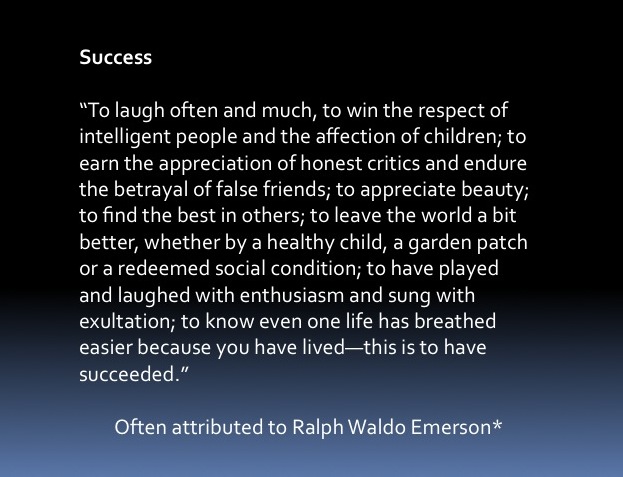 When I embarked on the Wayward Journey last September, I dreamily contemplated a sabbatical of self-examination, writing and study, coupled with starting my own business. I looked at my time in much the same way, I suppose, a college professor optimistically expects to finish a book, travel and do research over summer break—only to find the days slipping away, and soon it’s August and many of the things on his list haven’t been accomplished.

But what is the measure of success? Is it productivity? While I have accomplished much on my list over the last seven months, I’m not sure the guy with the most items checked off wins in the end.

I was on a website recently called “Joy of Quotes” that had hundreds of quotes from famous people about success. Not a single one talked about the little things I get bombarded with every day in my working life: how to increase search engine optimization, get more media placements, increase e-mail open rates, better manage my time. That is, nothing about “more, more, more.”

Rather, most successful people talked about fulfillment, helping others and understanding that failure often is a precursor to success. Failure is not something that many of us aspire to, of course. But in fact, the fear of failing is what keeps us from not trying and, in essence, prevents us from ever succeeding.

One of the great lessons in life is that until you let go of your fears, drop your petty concerns and give up your selfish ways, you are never going to be truly happy or successful. It’s that letting go part that is the hardest. I have often wondered about the New Testament story of the rich man who asks how he might enter the kingdom of God. When Jesus tells him he must sell everything he owns and follow him, the man is crestfallen and goes away. Jesus then says that it would be easier for a camel to go through the eye of a needle than for a rich man to enter heaven. That’s how hard it is for us to give up our constant desire to own and do more. And yet, every great leader (and parent) understands that in the act of giving up everything—sacrificing yourself—you actually succeed big time.

I’m an admirer of the work of Umair Haque, director of Havas Media Labs and a regular blogger on the HBR Blog Network. He writes about creating a new kind of economy that is less concerned with consumption and more concerned with human well-being. He calls it an “eudaimonic” economy, after the Greek philosophical term for “highest human good.”

His HBR post from May 2011 (“Is a Well-Lived Life Worth Anything?”) really makes you think. “Eudaimonic prosperity,” he says, “is about mastering a new set of habits: igniting the art of living meaningfully well. An active conception of prosperity, it’s concerned not with what one has, but what one is capable of.” Among the key attributes he ascribes to Eudaimonia:

In a more recent post, “You Don’t Need This ‘Recovery,'” Hague calls on each of us to engage in a “tiny revolution.” He’s a masterful writer. I’ll leave you with just one paragraph, but there’s plenty more:

I don’t want a revolution. I want a million tiny revolutions. Revolts not merely against, but for, towards, into. In a cold universe, nothing matters more than a tiny spark of life; living fully, wholly, incandescently, not merely “happily,” but full of significance, infused with belonging, rich with meaning, seared with love, spent with grace, consumed with purpose, hinting at the closest you and I have to a truth: none of us will be forever. But each of us is right here, right now.

* Source of “Emerson” Success quote: While I love this quote widely attributed to Emerson, The Ralph Waldo Emerson Society says Emerson never said it. In fact, it is a variation on the writing of one Bessie Anderson Stanley and appeared originally in an anthology of quotes published in 1904. Sometimes you’ll see the quote (mis)attributed to Robert Louis Stevenson (thank you, Hallmark, for that one). BTW, the University of Virginia (my alma mater) asked its Arts & Sciences graduates to send in their definitions of success and published them here. The “Emerson” quote is included, but at least the grad submitting it noted it is “attributed” to Emerson. This is the difference between a regular college education and one at U.Va., where we are trained to be scholars and seekers of truth. 🙂