The brothers Morris, together again 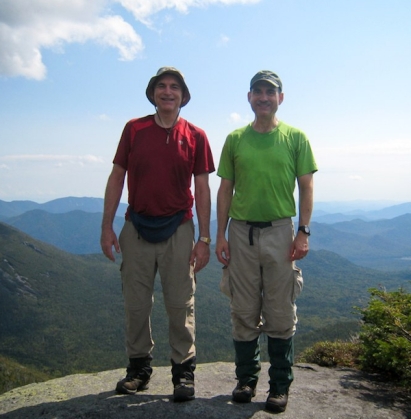 Here we are about to climb Mount Marcy, the highest peak in the Adirondacks at 5,344 feet. I’m on the left and 2-½ years older. Photo courtesy of Bam-man-photoman.

When my brother and I were younger, we sometimes were mistaken for each other, as if we were twins. Then I became incredibly distinguished-looking with my gray temples, and he lost his hair on top.

At U.Va., we were both in the Pep Band, which caused some confusion. When I visited him at Princeton, where he earned a Ph.D. in chemical engineering, I’d be walking on campus, and someone would call me Barry. At first I thought it was funny, but then I wondered, hmm, what if I actually became Dr. Barry Morris, famous research scientist? Nah, as soon as someone asked me to do a calculation, I’d be dead in the water.

Over the years, he has become an expert on plastic extrusion and packaging, and I’ve gone on with my career in PR and communications. But we both share a love for music and the outdoors.

Barry plays trombone and is in a jazz band and a community orchestra. I used to play the trumpet and now mess around on the guitar, but I probably couldn’t make it into any real band. He’s precise, and I’m lyrical.

Two weeks ago, we went backpacking in the Adirondacks with two of Barry’s fellow band members. What incredible views! And what rugged terrain! I’ve done a lot of hiking over the years but none quite as strenuous as these so-called trails of rocks and mud that either go straight up or straight down 5,000-foot peaks.

I had to laugh, despite feeling like I was on the verge of a heart attack, when Barry announced at the conclusion of one of our hikes that he had burned more than 3,000 calories.

“How do you know?” I asked. We all were panting and drenched in sweat, but he pulled off his shirt to reveal a heart monitor strapped across his chest. That and a special watch he wore combined to give him a reading of calories burned along our route that day.

So typical, I thought.

Traits that we find commendable (or at least tolerable) in ourselves always seem annoying in siblings, don’t they?

Of course, Barry has many admirable qualities that I seem to lack. He is super-organized; I am not. He exercises regularly; I do not. He is a good cook; I stay out of the kitchen. He sticks with things; I lose interest after awhile…

And so the list goes on. This trip reminded me that brothers are meant to complement one another—where one is weak, the other is strong. And that wisdom comes from accepting who you are and accepting others for who they are. The sooner you learn that, the sooner you can enjoy each other’s company…and take a brisk walk to the top of the mountain.

1 Response to The brothers Morris, together again