‘Do it now!’ or intentional vs. accidental growth 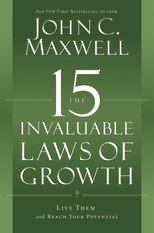 I’ve been reading selections from John Maxwell’s new e-book, “The 15 Invaluable Laws of Growth,” which hit digital book stores last week. I haven’t actually downloaded the book. Instead, I’ve been dipping into his blog, “John Maxwell on Leadership,” where he’s been teasing us with selected excerpts.

One of the “laws” I like is his admonition to shift from “accidental” growth to “intentional” growth.

“People tend to get into ruts in life,” he explains. “They get in an easy groove, and they don’t try to break out if it—even when it’s taking them in the wrong direction. After a while, they just get by. If they learn something, it’s because of a happy accident. Don’t let that happen to you!”

In case you’re wondering about the difference between accidental and intentional growth, Maxwell gives us this handy-dandy comparison to see where we stand:

I feel pretty good about many of the attributes in the “intentional growth” category, but the first one got me thinking. Yes, it’s true, I often put things off until tomorrow. Who doesn’t? Well, successful people don’t.

W. Clement Stone reportedly made his employees recite the phrase “do it now” again and again at the start of each workday.

Maxwell describes a seminar given in 1974 by insurance tycoon W. Clement Stone. Stressing the need for urgency in business decisions, Stone told his audience to repeat the words “do it now” 50 times every morning when they got up and 50 times at night before they went to bed. (Incidentally, this was 14 years before Nike introduced its famous “just do it” slogan.)

The word “later,” Maxwell says, “is one of those dream-killers, one of the countless obstacles we put up to derail our chances of success. The diet that starts ‘tomorrow,’ the job hunt that happens ‘eventually,’ the pursuit of the life dream that begins ‘someday’ combine with other self-imposed roadblocks and lock us on autopilot.”

Why do we put things off—big things that could make a huge difference in the quality of our lives? Complacency. Fear. Ignorance. Aversion to risk. Lack of confidence. Financial and educational barriers. These are certainly factors, but they are all obstacles that can be overcome.

I wrote last month about a panel presentation I organized of PR consultants who left the security of their full-time jobs to go independent. What made them take that chance? One of the speakers, Shawn Flaherty, talked about after all the planning she did to get ready for the plunge, she ultimately had to “take a leap of faith.”

It’s that little spark, that inner voice that says “oh, what the heck, let’s try this,” that makes all the difference in the world. At some point, successful people take chances, often big chances. It may be scary at first, but I’m beginning to see that not acting on your dreams will stunt your personal growth far more than taking a leap of faith.

This entry was posted in Goal setting and tagged do it now, growth, intentional, John Maxwell, leap of faith, W. Clement Stone. Bookmark the permalink.

2 Responses to ‘Do it now!’ or intentional vs. accidental growth