Breathing life into the Valley of Dry Bones

My visits to Greensville Correctional Center, Virginia’s largest prison, remind me of one of Ezekiel’s visions. It’s the one in Ezekiel 37 where God restores a valley of dry bones to life. Ezekiel records that there is a noise and rattling of bones as God breathes life into the dead.

Whenever our Kairos prison ministry team enters Greensville, God causes dry bones to rise up. The spiritually dead are awakened. Our team recently completed a four-day retreat with 42 inmates, and there was no shortage of miracles as life was breathed into the Valley of Dry Bones.

It’s hard to explain what a Kairos Weekend is all about. Some call it a short course in Christianity. While that’s correct, it really doesn’t do it justice. It’s kind of like saying that Jesus was a guy who lived 2,000 years ago and not mentioning that he’s the son of God and the redeemer of mankind.

All I can say is that during our Kairos time, we always see amazing transformations. It may not happen with every man, but it occurs with enough frequency and in such powerful ways that we know that something wonderful is at work. We know it’s not us, so it must be God. 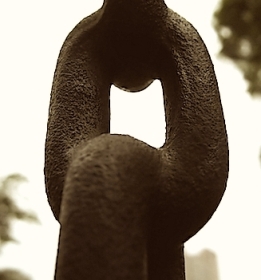 The Kairos prison ministry program is helping to break chains and renew faith.

There was a time when I would have scoffed if you told me that men behind bars could be changed simply by the power of forgiveness and love. But I have seen it with my own eyes. Men have learned to trust again, to forgive others and themselves, to live with new purpose, and to spread a message of hope and light in a place of darkness.

I admit that there was also a time when my belief in God’s healing power was about the size of a postage stamp. My bones were dry. But Kairos and Greensville changed that. I’ve gone from a postage stamp to a railroad car, and I’m working on a freight train.

On Sunday night at our closing ceremony, a group of us joined the prison’s praise band to sing about an army rising up to “Break Every Chain.” As I looked around the gymnasium filled with well over 200 people, I realized that the Valley of Dry Bones had stood up as an army, an entire room filled with inmates, visitors and our Kairos team moved by the power of Jesus.

You don’t have to attend a Kairos Weekend to see that America’s criminal justice system cries out for change. We lock up more young men in their prime than any other country, and those men are disproportionately black. We do very little to rehabilitate them and support them when they are released. Is it any wonder that many of them return to prison?

Still, we know that Kairos is making a difference in their lives. Recidivism rates go down in prisons that have Kairos and so does inmate-on-inmate violence. We know that Kairos has reunited families, restored relationships and led to jobs when inmates are released. At the very least, it gives them a new sense of decency and respect for themselves and others. For some, it is an absolute lifesaver.

About 90 percent of the incarcerated in the U.S. will be released at some point. They’ll move back home or into new neighborhoods. Not all of them will have the benefit of Kairos, but those who do will be better equipped to start their lives over. If a former resident of Greensville moves next door to me, I know I would want him to have had a Kairos experience.

This entry was posted in Purpose and tagged Break Every Chain, Ezekiel, God, Kairos, prison ministry, Valley of Dry Bones. Bookmark the permalink.