Become a missionary for your cause or company

On Saturday, I returned home from a mission trip to Mozambique where I had the privilege of working with a group of Methodist missionaries who are making a difference in rural Cambine. All I can say is: Wow! If everyone could live their life with just half the dedication and joy I saw there, then, as the song says, “what a wonderful world this would be.”

I know, not everyone can pick up and go half way around the world to help the less fortunate. But everyone can apply some of the principles I saw at work in Cambine and nearby Chicuque. We often talk about the need for passion and purpose in our work. I suggest that taking that one step further—becoming a missionary for your cause, startup or company—separates the truly engaged from those who are merely getting by.

So here are four traits worth aspiring to that I saw in abundance, both in our own team and in the missionaries we worked with:

Believe. It’s pretty simple, but if you don’t believe in your organization, and in its services and products, you can’t possibly be successful. Missionaries believe, period. They believe that what they do can make a difference and change lives. They start their day with that belief, and they end the day with it. Believe in yourself, your people and your products. 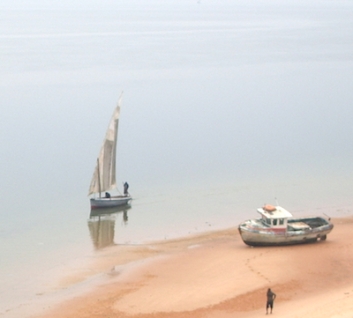 Amid poverty there is great beauty in Mozambique.

Connect. Missionaries know how to connect with others at the most basic, human level. This is not mere communication. This is true connection. In Mozambique, we were at a disadvantage because we didn’t speak the language. Luckily, our missionary friends were there to help. When they translated, they gave completely of themselves, speaking directly, earnestly and from the heart, so that everyone fully understood and embraced each other’s point of view. Don’t just communicate with your employees and customers, connect with them.

Serve. So much has been written about servant leadership, but it is extraordinary when you see it in action. The missionaries I worked with demonstrated time and again that serving is a purely unselfish act for the benefit of others. Service is grounded in doing, in the possible, but that doesn’t mean it isn’t remarkable. When people see cheerful service in action, they respond accordingly. It spreads, multiplies and always comes back to reward you in innumerable ways. Give of yourself, and you will receive many times in return.

Transform. The best and brightest leaders don’t just lead; they are committed to transforming the world. Missionaries believe their organization is making a difference, and they are passionate about it. In fact, they believe more in the transformative power of their cause or product than they do in making money or pleasing investors. Work to transform the world.

P.S. Several years ago, I met a man at a conference who said he was the “chief evangelist” for his company. I wasn’t sure what that meant and decided a better title for him was “chief schmoozer.” I later discovered that evangelist had become a popular title at startups and technology companies for the person in charge of “evangelizing” (promoting) the company. My advice to entrepreneurs is to follow the model of the committed missionary who quietly and tirelessly works for change. Don’t become a hollow evangelist; instead, strive to be the person on the ground doing the real work that makes a difference in people’s lives.

6 Responses to Become a missionary for your cause or company