Emotional intelligence, or confessions of a male model

I’ve spent more time than I care to admit poring over stock photos on websites like bigstock.com, looking for images I can use for my JMC website. You can purchase photos for web use for about $3 a piece, which is far less expensive than hiring a photographer to shoot you talking to clients or looking important behind a desk. 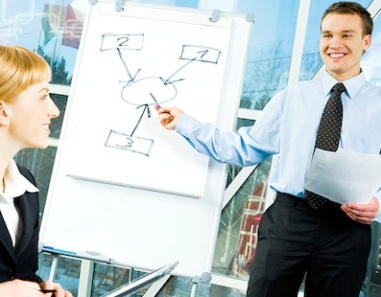 The three truisms of stock photos: The people are young; they are happy; and they can count to 3.

The problem with stock photos, though, is that they’re not “real” people. They’re not you talking to anyone you know. But they are happy people, often smiling and laughing with a golden glow about them, or looking very capable and executive-like. Very upbeat, can-do folks, these stock people are.

So when my friend Michelle Mock, owner of Collaborative Thinking, invited me to be in a photo shoot for her new website, I was happy to accept. It amused me to think that I might be in a “real” stock photo.

I found it surprisingly enjoyable being a male model. I met some neat people and got to listen to a real pro, Michelle, present on the topic of “emotional intelligence.”

Michelle does leadership coaching and asked us to write on Post-it notes the characteristics we most admire about leaders. Many of us wrote down things like “compassionate,” “interested in people” and “good listener.” 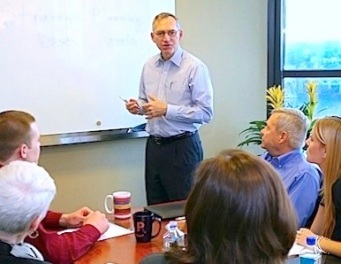 A real guy talking to real people. Photo by Rob Cannon and courtesy of Michelle Mock of Collaborative Thinking.

To drive home her point, Michelle had us all put our Post-it notes on a board that had the three characteristics displayed. As you might expect, the EQ third of the board was covered in yellow stickies. The other two had only a few.

Emotional intelligence is a term that Daniel Goleman popularized in his 1995 book by the same title, and it derives from research done by three psychologists—Howard Gardner (Harvard), Peter Salovey (Yale) and John Mayer (New Hampshire). Essentially, EQ theorists argue that our traditional measuring stick for intelligence—IQ—is too narrow an indicator of success.

Goleman says that successful leadership requires awareness, control and management of one’s own emotions and those of other people. So EQ embraces two aspects of intelligence: 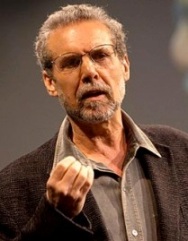 Goleman wrote about the business applications of EQ in a 1998 Harvard Business Review article where he described his research at nearly 200 large, global companies. According to HBR, “Goleman found that while the qualities traditionally associated with leadership—such as intelligence, toughness, determination, and vision—are required for success, they are insufficient.”

When you think about it, what is that je ne sais quoi that you notice most in a good stock photo? Why, it’s the subjects’ emotional intelligence, of course! They’re animated; they’re motivated; and they’re working together on a common goal. In short, they are high on EQ.

So if you need a male model for your next EQ (not GQ) photo, I’m your man!

2 Responses to Emotional intelligence, or confessions of a male model