Add one more to the pile of discarded technology 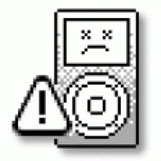 What no iPod owner ever wants to see.

My first and oldest iPod died last week. The dreaded Sad iPod icon appeared on the screen, and that means either I dispatch it to the boneyard of discarded technology or I pay Apple more than it’s worth to fix.

I can’t say that I was surprised it bit the dust, considering its relative age (purchased in late 2005) and that I have dropped it more than a few times. Known originally as the Fifth Generation iPod and still sold today as the Classic iPod, it was the first to feature video capability. It also has a hard drive, making it a handy digital storage device.

To be honest, I haven’t used it much since purchasing an iPod Touch two years ago. But with 60GB of space, it was the main repository for a lot of my music. And most of that music, unfortunately, wasn’t backed up on a PC. That’s because I preferred to keep the original music on CDs.

So what was once a bright shiny toy is now a candidate for recycling. I can remember being so careful about protecting its screen. This particular model was notorious for getting scratches. I think that’s when the iPod case industry took off because we all had to buy protective coverings for our beloved iPods.

I can also remember spending hours downloading and watching the first video podcasts. It seemed like everyone was making podcasts and uploading them to iTunes. I soon had my favorites—an oddball comedy troupe from L.A. called “The Ministry of Unknown Science,” Marco Tempest, “the Virtual Magician,” and an artsy podcast called “Four Eyed Monsters.” I was also a big fan of many audio podcasts, including the “Word Nerds,” a weekly show by two English teachers about words, language and grammar.

New technology spurs new applications, but what do we do with the old stuff? Photo from engadget.com

Most of these early podcasts have ceased production. My listening habits have changed since then, too. I have XM Radio in the car and Pandora on my PC. If I want to hear a particular song, I’m likely to first search for it on YouTube. Often, that is all I need to satisfy my curiosity or my “quick fix” for that tune.

Each new technological development spurs its own cottage industry of enthusiasts and early adopters. And after the first wave, those pioneers move on, paving the way for mainstream commercial applications. When I purchased my iPod Touch, I was surprised at how quickly I abandoned my old “auditory” habits. With its WiFi capability, the iPod Touch became an extension of my computer, allowing me to view email and surf the Internet. Listening became secondary.

And then there are the apps. Don’t get me started on those. I could spend a lifetime downloading and trying out apps.

It’s hard to believe the technologies of just a few years ago are already being cast aside. We lived for decades with LPs, then along came tapes, CDs, MP3s and streaming audio in quick succession. So what’s next?

For now, I plan to keep my iPod. I can’t bring myself to throw it away just yet. Perhaps I will have it mounted as a curiosity—or donate it to the Smithsonian.