EMV ‘smart’ cards: the next big thing in payments 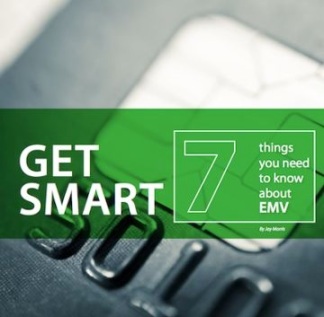 What’s in your wallet? EMV credit and debit cards with computer chips are poised to replace mag stripe cards.

What are EMV cards, you ask? Pull a debit or credit card out of your wallet, and I’ll explain. Notice the dark-brown horizontal stripe on the back? That’s the magnetic stripe used to “swipe” your card at a terminal. EMV cards, also known as “smart” or “chip” cards, have an integrated circuit embedded in them instead.

EMV chips are the next big thing in card technology; they’re impossible to counterfeit, and they’re capable of delivering highly secure transactions. Soon, they’ll replace the mag stripe cards that have been in use for decades.

These chips can also process contactless payments. That’s where you waive your card within close proximity of a terminal, and it processes your transaction (poof, like magic) using NFC or Near Field Communication. The same technology is being developed for smartphones to allow you to use your phone as a mobile wallet.

As cool as this new technology is, migrating to these new cards will be a daunting task. The U.S. has over a billion magnetic stripe cards in circulation, 16 payments networks and 12 million point-of-sale terminals. The Aite Group has estimated the cost of conversion in the billions of dollars.

It’s no wonder that merchants have so far have been reluctant to purchase new EMV terminals. They also have enjoyed a “free ride” when it comes to counterfeit credit card fraud, which is generally absorbed by the card issuers.

Credit unions have been early adopters in the EMV space. For credit union members who live or frequently travel abroad, EMV makes a lot of sense. Travelers to Europe have long complained that their mag stripe cards sometimes get rejected at train and airport kiosks where EMV is now the norm. In fact, Europe has used EMV cards for well over a decade.

If you want to read more, download a PDF of my article, or visit the digital edition of the September-October 2013 issue of The Federal Credit Union.

By the way, this is the second article I’ve written about technology and credit unions. Last year, I wrote “In the Year 2022,” which describes the future of mobile banking. Now that’s a great piece, too. 🙂