Straight from Central Casting: A meadow suitable for running through with outstretched arms. (freerangestock.com)

Three months have gone by since I last posted here at The Wayward Journey. As the days and weeks passed, I imagined a great celebration in the blogosphere the day I finally pushed the “publish” button again.

The music would cue up, the sun would shine, and I would run through a golden meadow with outstretched arms.

The world’s greatest bloggers would all be there, cheering me on, giving me atta boys and high fives as I reached the end of the field. The music would crescendo to a rousing conclusion as I unfurled with great fanfare and beaming pride my New Post.

Okay, cut. That’s a little too Hollywood, even for a dreamer like me. But I did anticipate that this first post in months would be special, something suitable for framing, as we used to say in the pre-digital days.

Friends and a few followers asked, “When will you blog again?”

“Soon,” I said, thinking that I would surely get something posted. After all, it’s not like we bloggers lack for material. Even the most mundane experience, in the hands of a resourceful writer, can become the subject of a brilliant homily.

And though I’ve had many experiences over these past few months that I could have blogged about, I did not get to them, obviously. I got busy, and The Wayward Journey went dark.

Oh, I’ve been writing all this time, that’s for sure. In February, March and April, I wrote like a madman on several big projects for Jay Morris Communications. After all, that’s what pays the bills. Like a horse that’s been ridden too long, I was all wrote out. After a full day of writing for clients, I would say to my blog, “Tomorrow, I’ll get to you tomorrow.” I was spent, so my blogging got put on hold.

Then weeks went by, and pretty soon when I visited The Wayward Journey, it was like looking at an old yearbook or walking through a graveyard. I began to wonder if the Journey was over. Had I said all that I had to say? Was this blog going the way of so many other blogs—launched with great enthusiasm, then left to languish in cyberspace like a spent rocket?

No, I had a hunch I’d be back because this is The Wayward Journey, with a capital W. But when those old creative juices finally began to stir, I decided that I didn’t want my first post back to be my usual fare—stories about everyday life that when examined from a different perspective yield new insights. Although, that does sound pretty good, doesn’t it? 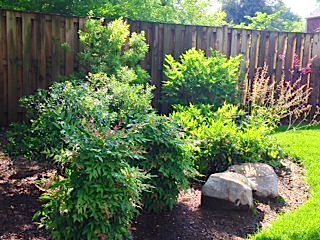 I could be blogging about trimming bushes!

For example, on Saturday, I spent the day trimming bushes and trees. I’m sure I could give you 500 words on the importance of careful pruning, why it’s necessary to cut out those things in life that impede our growth so that we can be more fruitful. I could quote the Bible even, John 15:2: “He cuts off every branch in me that bears no fruit, while every branch that does bear fruit he prunes so that it will be even more fruitful.”

I wanted to write something more, though, something epic! Something so poignant, so pregnant with meaning, that readers would literally swoon. Babies would stop crying, politicians would stop bickering, warring countries would stop fighting. The stock market would explode with approval, and my retirement savings would mushroom overnight. For once, I could look at those annoying Internet ads—the ones that ask, “Do you have $500,000 to invest?”—and say, “Yes I do, and it’s all because of my blog!”

And so here you are, having read this far, and I’m guessing you’re not swooning, the stock market is still sputtering and babies are crying. C’est la vie, right?

Sometimes a blog about trimming bushes isn’t a bad thing. Because trimming bushes is real, and it needs to be done. Robert Frost once said, “In three words I can sum up everything I’ve learned about life: it goes on.”

Yep, it does. We live through life, and we draw what we can from it. A moment savored, a photo shared, a lesson learned. We raise a glass and toast each other for making it through another day, another year, another birthday or anniversary.

I made it through these last three months, and I’m here. I can’t say that I have anything terribly profound to impart, but I’m glad to be back in the saddle.

I’d like to think there was someone out there nudging me a little, secretly giving me a kick in the butt to get back to it. We all need someone who believes in us when we’re tired and don’t think we can go any further. Even the Desperado in the Eagles song had someone looking after him. To those folks who knew that I would eventually come down from my fences, thanks!

So I’m back, at least for a little while. Long enough to catch up and have a Corona—or two. Long enough to see what you’ve got in the refrigerator, maybe stay for dinner.

Oh, and those chocolate-chip cookies you had on the counter, I only ate two. I swear.