Credit unions are proving to be a smart alternative to banks 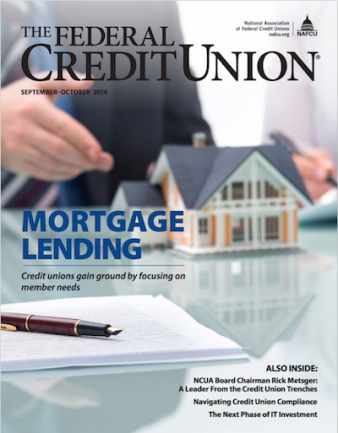 Credit unions are on a roll. In March, I wrote about the gains they’ve made in auto lending (“Credit unions rev up for growth”). In the most recent issue of The Federal Credit Union, I write about their equally impressive progress in the mortgage-lending space (“Credit unions gain ground by focusing on member needs“).

Consumers are catching on that these member-owned institutions are a smart alternative to banks and finance companies. Credit unions are increasing their market share and beating out bigger competitors because they’re in business to serve their members, not make a profit.

As I note in this most recent piece, mortgage lending dipped across the board for all lenders during the housing crisis. But credit union lending rebounded in 2010 and began to increase; lending at other institutions, however, continued to fall and then leveled out.

It’s ironic that at about the same time my mortgage story graced the cover of TFCU, news accounts began surfacing of widespread illegal practices at Wells Fargo Bank. The bank was fined a record $185 million by regulators for secretly opening unauthorized deposit and credit card accounts to boost sales figures. Apparently 2 million sham accounts were opened, and 5,300 employees were fired for ethics violations.

After looking at my article again the other day, I think some of the words carry even more weight in light of the Wells Fargo scandal:

Credit unions were formed to serve the needs of their members, not private investors…Their members-first approach has become a winning formula—superior products and competitive prices, coupled with a high degree of service and loyalty.

If you don’t belong to a credit union, maybe you should. They offer the same products and services you’d get at a large bank but with fewer fees, higher returns on your savings, and lower rates on loans and credit cards. And chances are no one will illegally open an account in your name just to collect a sales commission.