Oh, how we love (and hate) our social media

Those of us who use the popular WordPress blogging platform got quite a scare on Wednesday afternoon when, “poof,” all of our followers disappeared in front of our very eyes. I saw it myself. One moment, my followers were listed on my dashboard, the next moment they were AWOL.

Imagine, all three of my followers gone! Okay, I have a few more subscribers than that, enough that I was concerned. Think of those bloggers who have worked for years to build a loyal fan base of thousands of followers. They must have really been sweating. 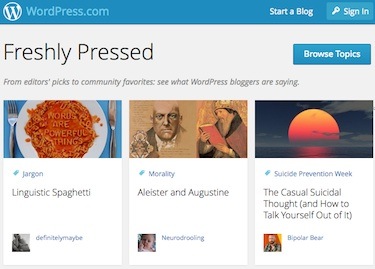 At the time of this post, there were 70.2 million WordPress sites in the world, making it by far the most popular content management system.

As it turns out, the followers really hadn’t disappeared. There was a glitch in the WordPress system, and it was repaired fairly quickly. So no harm, no foul, you might say.

WordPress is a free platform. I didn’t pay WordPress anything to deliver this blog to you. Think about other “free” popular social media platforms: Facebook, Twitter, LinkedIn, Pinterest, etc. These media are also available at no cost to content providers and consumers, but all come at a price: little or no control over the medium.

In the good-old days of conventional media, we bought ad space in newspapers and magazines, and time on radio and TV. We rented billboards and signs, and we paid for direct-mail postcards. We carefully controlled the message, timing and duration of our campaigns.

Not so with social media. We’ve ceded control of both the medium and the message. It’s the loss of control over the messaging that has been the hardest and most profound change for us to grasp.

A company spends years carefully building its brand, only to have it tarnished overnight when an inappropriate tweet goes viral. A candidate loses popularity when an ugly comment is captured on YouTube. A job seeker with a great résumé wonders why she didn’t get the position—could it be all those unflattering posts and images on Facebook?

For control freaks, social media is like a bad dream. For those who understand its power, it’s an amazing and liberating gift.

Social media makes me think of the counterculture of the 60s and 70s. The French deconstructionist Jacques Derrida wrote at the time about how social, economic and political structures maintain their power by excluding those who are left out. But he also demonstrated that what is repressed never disappears. It always comes back to unsettle, reverse or topple what has been constructed. In other words, the status quo gets deconstructed.

If this sounds like power politics, in a way it is. Social media can be just as disruptive as a sit-in or protest march. On the other hand, it can be as inane as a stupid pet trick, as adorable as a baby’s first words or as emotional as a 9/11 photo. It’s out there, it’s raw, and it often confounds and amuses us at the same time. But for those willing to ride the wave, it can be an awesome experience.

So WordPress, please don’t unsubscribe my followers. I like it when people can read my stuff.